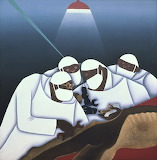 In his six decade long career, Rameshwar Broota has explored themes ranging from social satire to deeper introspective ideas. With the male body gaining prominence as a site of investigation, the artist’s use of vivid colours was replaced by a monochromatic palette.

The Family by F. N. Souza 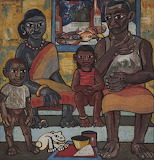 Francis Newton Souza was born in 1924 in Saligao, Goa in a Roman Catholic family. He joined Sir J.J. School of Art in 1940. In 1947, he co-founded the Progressive Artists’ Group along with S.H. Raza, M.F. Husain and three other fellow artists. In 1949, Souza left for London. His autobiographical essay Nirvana of a Maggot was published in 1955 followed by a solo exhibition at Gallery One in London that brought him considerable recognition.

Born in 1887 in Beliatore village, Bankura , West Bengal, Jamini Roy enrolled at the Government School of Art (presently known as Government College of Art & Craft), Kolkata under the tutelage of Abanindranath Tagore in 1903. Roy began his career as a commissioned portrait painter. However, drawing from indigenous sources he formed his unique style by the 1920s. His paintings were exhibited for the first time in Calcutta in 1938, and touched new heights of popularity by 1940s with the Bengali middle class and European clientele.